It was a bad night. I finally fell asleep sometime after 2.30 am and was awake again just after 5. The predicted gale force winds had arrived I think and I couldn’t relax as the wind and heavy rain was battering my flimsy little tent. The heavy rain came in waves and by 5.30 am I couldn’t stand it any longer so packed up. The sky was darker than it usually is during the night!


It wasn’t far to Ullapool and I was there by 8 am, even going slowly and stopping a few times. I drove past Stac Polly again, although I couldn’t see it.
Ullapool is a big town in these parts and the main port to catch a ferry to Stornaway in the Outer Hebrides. It sits on the edge of Loch Broom. The sky was lightening so I drove out to a small peninsula, parked the car and sat looking at the weather across the Loch for an hour or so. I was tired. The car was being rocked by the violent wind.    After an hour and a half I drove back into Ullapool. The rain had stopped so I parked the car in a layby, got my tent out and “flew it” like a kite. Within a couple of minutes I had almost taken off twice and the tent was dry. Time for a coffee! I stopped at a small place called Tea by the Sea, with its pink door and craft shop. The people there were very nice and I must have drunk a gallon of tea and eaten the biggest piece of cake ever. All the people in the cafe joined in one big conversation and it was very jolly. I was recommended to head to the Ferry Boat Inn later for some live music.    I took a quick trip to the Ullapool museum and learnt a bit about the Klondikers that came over to Loch Broom for the fishing boom in the 1980s-90s, during the Cold War. The locals really took these Eastern Europeans to their hearts, although the ships must have been an eyesore in the Loch. 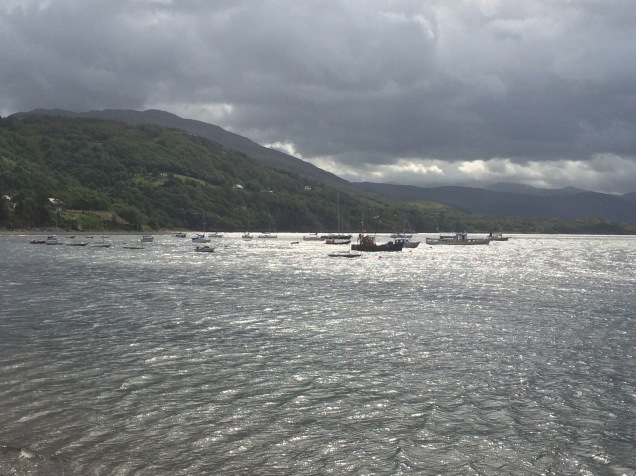 It was raining again and I checked into the Royal Ullapool Hotel. What a treat. My blog must sound quite depressing because my friend Donna had taken great pity on me and bought me a night in a hotel. How lucky am I to have a friend like that? Thanks Donna. I was going to make the most of the luxury, and first off I needed a nap!

I had a lovely dinner overlooking Loch Broom and then, despite being tired, I headed out to the Ferry Boat Inn to check out the live music. It turned out to be rather good and it was midnight before I crawled into bed. Ah, a nice, soft bed. Zzzz.