It wasn’t even 7 am when Sally dropped me off at Laugharne (pronounced Larne) and it was freezing; there was frost on the ground. Still, that’s not a good enough reason not to wear shorts, especially as the sky was bright blue and the sun was rising.

I stood at the base of Laugharne Castle and ate my breakfast (egg sandwiches) while shivering and admiring the wonderful view down the Taf Estuary.    Laugharne makes much of being the home town of Dylan Thomas and his family 1949-53. I was completely alone wandering around early on a Sunday morning. I checked out The Boathouse, where Dylan Thomas lived, and his writing shed, which has been decked out as it might have been. I even found his grave in the churchyard.   If he experienced such beautiful mornings as this, in such a wonderful, peaceful setting, then I’m not surprised he was inspired to write poetry. It was a magical moment in time.    By the time I reached St Clears I had just about thawed out, removed my fleece and added sunglasses and suncream. I crossed the Afon Taf and headed back down the other side, mostly following (albeit backwards) the pilgrimage route from Carmarthen to St David’s.   Wharley Point stands at the confluence of the rivers Taf and Tywi, and the views from this point were magnificent. Pendine Sands was just across the river Taf and I could see all the way SW to Caldey Island and SE to Worms Head.         I had been fighting a hangover all day and so, when I walked into Llansteffan at 2 pm I stopped at the Inn at the Sticks (named after an area of woodland called the sticks where locals used to meet to sit on benches, gossip and enjoy the view across the Afon Tywi). Their roast beef dinner was just the ticket.    It was only a short hop from Llansteffan to my budget accommodation (there aren’t many campsites around here).    The International Hostel at Pant Yr Athro was an interesting place. It was within a cluster of dwellings that included a posh hotel, stables and a chalet village; an eclectic mix. The hostel was dressed up as a Mexican bar…I couldn’t work that one out. The manager was very nice but I’m not sure he’s very good at cleaning. Lucky I was too tired to bother. 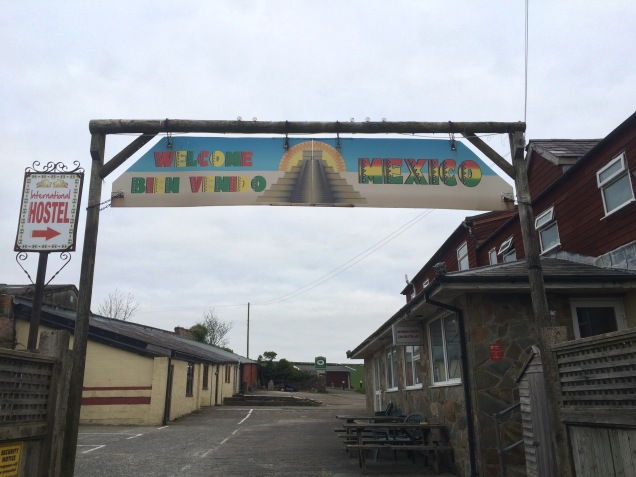 One thought on “Day 258 Dylan Thomas and the Afon Taf”